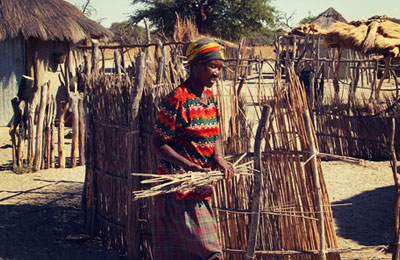 The Batswana peoples (Batswana being the collective term for the varied tribal groups in Botswana) depend on the land for a living in some form or another. Although there has been a marked migration of people into towns in search of fast diminishing employment opportunities, many still hold onto the traditional concept of the ‘cattle post’ and the ‘home village’. Many Batswana, particularly the older generation, while working in towns, may still return to their village or cattle post at weekends and holidays. Owning cattle is still seen traditionally as a symbol of wealth and status.

Half the people in the country are of Tswana origin (the term used to describe the 10 or so major groupings of people within the country and the 2 million from South Africa’s Bophuthatswana area). The largest group within the country is the Bangwato. Each group has its own traditional chiefs and proprietal rights over their own lands. There are also several non-Tswana minority groups including the Humbukushu and the Bushmen. Setswana and English are the official main languages in the country and thanks to a sound educational system where the majority of Batswana receive an education to at least upper primary level, many can speak English.